It took me awhile to get to the point where I even felt like writing about Troy Davis. I was emotionally drained in the days leading up to and following his execution. My feelings bounced between confusion, shock, anger and disbelief. Even though I voiced my opinion on Twitter with abundance, arguing every point imaginable, I knew I wasn’t ready to bring the issue to closure in my mind. Now, I am.

I am not at the pep rally for the American justice system nor am I ignorant to he historical relationship between people of color and the legal system in this nation. Nonetheless, I couldn’t believe it when it happened. I still can’t believe it. I mean, I know it happened. I know it’s real. Troy Davis was laid to rest days ago with hundreds of family members and supporters by his spiritual-side but it’s still just incomprehensible. 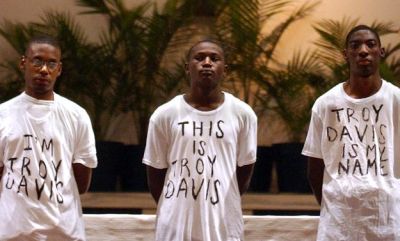 Yes, that’s what it is. I do believe it. I am not surprised that such a thing happened in America. After all, it hasn’t even been a hundred years since people were castrating black men and putting their…well, you know…in glass jars to be sat upon living room mantles. So I totally believe. I just don’t understand. There has always been something in me that never grasped the concept of group-think or people being inherently cruel or evil. So, anytime something like this happens, I am perplexed. But alas, groups of cruel (or at least misguided) people do congregate to create boards, committees, and legislative bodies that decide to put people to death even when there is enough reasonable doubt to fill Congress itself. 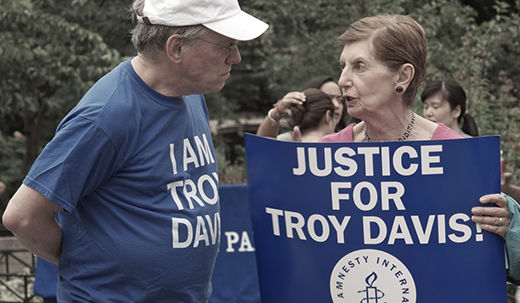 I guess this a fact that I will just have to grow up and accept. Yet, I can’t accept. And you shouldn’t either. If we get into our Tupac “that’s just the way it is” frame of mind, things will get worse. I don’t know how they can get worse. But I’m sure beyond the bounds of my thinking and imagination, they can.  So we must keep fighting. I know there’s not much people of few means and what some may perceive as little power can do individually, but like Mama Joe said in Soul Food, “One finger won’t make an impact, but you ball all those fingers into a fist, and you can strike a mighty blow.” Although I didn’t protest at any edifice meant for law-making or judging, I did send this e-mail to Chatham County District Attorney Chisolm a couple of days before Troy Davis’ execution:

Although ultimately my appeal, along with thousands of others, did not make a difference, I’d like to think that Troy Davis is now somewhere reading all the e-mails, letters, posters and legal motions drafted on his behalf. And he is smiling.

And your thoughts are...? Cancel reply

More (About) Life & Love (formerly ContraVerseSee) is designed to engage 20/30-somethings going and growing through all the joy, sorrow, triumphs, and challenges life brings. The blog's primary contributor - Mer - is an educator, podcaster, and former journalist writing her way through life, love, mommyhood and the organized chaos in her mind.