Sooo…I really don’t even know where to start. This story makes me crack up and pissed at the same time. Probably because of the irony and hypocrisy, respectively. The Cherokee Nation recently announced that they were considering expelling the descendants of freed black slaves from their group. *Insert screeching noise here* Wait, let me get this straight….the second-largest Native American tribe has decided they don’t want to be affiliated with black people anymore? Are these the same Native Americans who were oppressed by European settlers a few hundred years ago? Land stolen? Women raped? Killed en masse? Turned into drunks? Given measles and a motherload of STDs? No, seriously. Are these people apart of the Native community, which to this day are either: a) largely ignored, representing a tiny percentage of the U.S. population or b) exploited stereotypically in the media and openly mocked thanks to major-league sporting team names such as “Redskins?” O.K., one more time. After centuries of adding to the preservation, sustenance and growth of the Cherokee Nation, blacks are being given the boot? 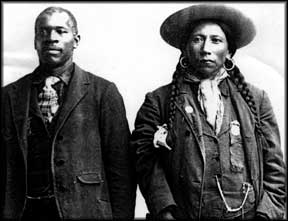 Daaaamn, nobody wants to be bothered with us, huh? I don’t know if the historical context is what makes this story both funny and sad or if it’s the fact that even the Supreme Court is telling Cherokee leaders that they are dead wrong. Imagine that. The Cherokee Nation recently disenfranchised its black members on all tribal matters to create distance while the U.S. government, who has ben notorious for disenfranchising blacks, is defending them. *Looks out the window to see if pigs are flying to get away from Hell freezing over.*

And your thoughts are...? Cancel reply

More (About) Life & Love (formerly ContraVerseSee) is designed to engage 20/30-somethings going and growing through all the joy, sorrow, triumphs, and challenges life brings. The blog's primary contributor - Mer - is an educator, podcaster, and former journalist writing her way through life, love, mommyhood and the organized chaos in her mind.